One of the six powerful and prestigious sects in the Draconic Ruins Realm.[1] The Divine Feathers Sect controls a massive territory including hundreds of cities with a total population of over several hundred million.[2] At the time Nie Li joined the sect, the only Martial Ancestor Realm experts were the Big Five.[3]

There are many factions and families vying for power in the sect. They compete in recruiting promising new students to raise their standing.[4] Many of the new recruited members are from the smaller realms, such as the Little Heaven Realm and the Tiny World.[5] This is common, because without the backing of such a faction they will have trouble acquiring much needed cultivation resources such as Spiritual Stones and Demon Spirits. However, joining a faction means becoming a lapdog of that family and losing much of ones freedom.[6]

No one knows exactly how long the Divine Feathers Sect has been around.[2] However, one thousand years ago the Divine Feathers Sect was lead by an extraordinary ancestor to become the most powerful of all the sects. Their strength even allowed them to survive the Great Destruction that followed. Despite this, the sect has been in decline for the last few hundred years.[7] By one hundred years ago they had fallen to be the third ranked sect, and they are now currently in the weakest position of sixth.[8]

Because of their history, they are head of an alliance between several powerful sects to keep the Demon God Sect in check. However, in the most recent confrontations with the Demon God Sect, the Divine Feathers Sect has suffered heavy losses and was greatly weakened.[9] They also lost several of their powerful experts that had god level growth dragon bloodline Demon Spirits. Such demon spirits are incredible rare and difficult to come by. This is another reason why the sect as recently been in decline.[6]

After Nie Li became the Divine Feathers Sect Master there were many rapid changes. He generously handed out Divine Elixirs and high level growth rate dragon bloodline Demon Spirits, leading to a substantial growth in the overall strength of the sect. However, during this time the sect was closed off, keeping their rise in power a secret from the rest of the Draconic Ruins Realm.[11] Within six months, eight pinnacle Dao of Dragon realm experts where able to break through to the Martial Ancestor Realm and the number of Dao of Dragon experts had reached tens of thousands.[3]

The sect is divided into three areas, the Outer, Inner, and Heaven divisions.

In his previous life Nie Li was able to break through the limitations placed on the Divine Continent Domain and visited many other worlds including the Draconic Ruins Realm and the Divine Feathers Sect. He also had some dealings with the Master of this sect as well.[1]

By this time it was a hundred years after the destruction of Glory City. Unfortunately, due to internal conflicts, the Divine Feathers Sect at this time ended up splitting into several factions. Some of the factions would be swallowed by other sects while the others simply declined into nonexistence.[15] 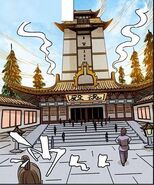